Whether it’s a tenor, three tenors, or a lot of tenors, what characterizes them is their singing high-pitched. That means, they are the high male voices, whose register usually goes from C4 to B5 (remember that the 4 scale is in the middle of the piano keyboard).

Then some try to approach high C and fly high to C6. Falso (or falsetto): when tenors reach these notes, they sing “from their head” (not “from their chest”), as the body uses resonators located on the face.

The etymology of the word “tenor” relates to “holding” (tenere) the text. It is something to which the tenors in the Renaissance religious music abided strictly. Each syllable correlates with a note, usually long and holding the work harmoniously, while the other voices in the choir –formed entirely by men as per the rules at that time– could fantasize melodically about that same syllable and play sweet melismata.

There are multiple categories within the tenor voice, namely: lyric, leggero, lyric-leggero, dramatic, heroic –also called heldentenor– (being one of the choir voices that usually has fewer members, aren’t all tenors heroic?). There are other labels, as per preferences: Mozart tenor, Rossini tenor, and even haute-contre and countertenor –we have already talked about these as one of our music curiosities.

A well-known type is the lyrical spinto tenor, who is somehow “troublemaker.” When orchestras back in the 19th century increased the number of instrumentalists, their power grew proportionally, at the expense of poor tenors. To defend themselves, tough guys like Enrico Caruso put belcantist virtuosity aside and focused on fierce power. The spintos are those pushing (spingere) and elbowing to get a special place. Plácido Domingo is, or was, one of those in that front row; now he has recycled as a baritone.

Let’s bring all these features to the tenor voices within a choir. We will see that it is a high-pitched voice, marginalized but willing to support the rest of the voices. At the same time, it enjoys showing off to others. To some well-adjusted cartoonists, these would be more female than male features. Therefore, as a choral joke, it is frequent to cast doubts on the masculinity of the tenors. 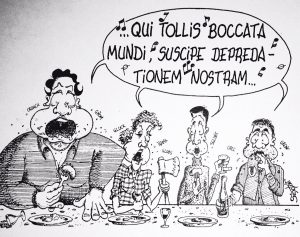 Illustration: Sinclair (OK: we had already used it here, but we like recycling)

Nothing to object to as a cordial and private joke between colleagues. The important thing is that the singer plays more than mere sound: he is putting his vocal cords at the service of expressiveness, instilling feelings. For some prejudging people, all these attributes are opposite to the alpha male image. Well, those labelers should know that there is no such thing (that alpha male thing is another falsetto: see here). They should also understand that masculinity is something different from preferences or orientations in certain areas. Let’s try asking ancient Greek warriors, as brave as affected.

All in all –now that we have painted ourselves into a corner– it is not rare to find gay choirs. If singing is an act of sensitivity, there seems to be something among gay people that allows them to draw that expression naturally. For example, the San Francisco Gay Men’s Chorus, daring to do things like this, is particularly brilliant.

The next article on these music curiosities will deal with the bass voice. Will it be the male archetype?